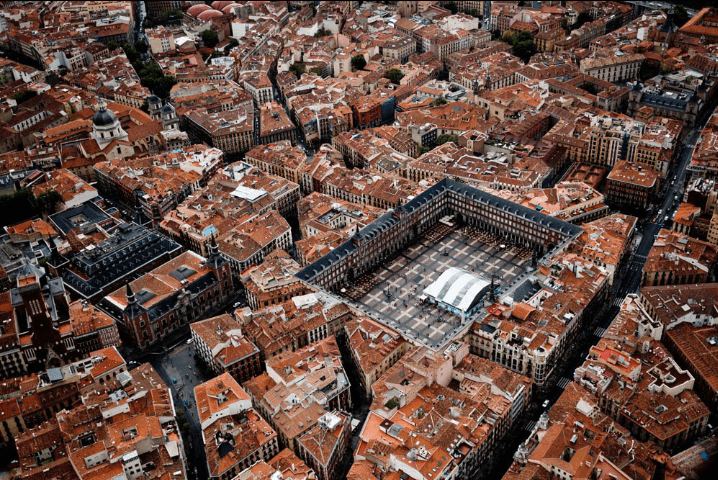 The Plaza Mayor dates back to the 15th century where it was originally called the “Plaza del Arrabal” and was used as the main market of the town. In 1561, the plaza was transferred to the city of Madrid.

Plaza Mayor is rectangular in shape and highlights the uniformity of the architecture. The Plaza measures 129 m x 94 m (423 ft x 308 ft). 237 balconies are present on the three-story residential buildings that face inward towards the Plaza. To enter or exit The Plaza Mayor, there are ten entrances to choose from, however, there are nine gates.The entrances are named: 7 de Julio, Arco de Triunfo and Felipe III to the North; Sal, Zaragoza and Gerona to the East; Botoneras, Toledo and Cuchilleros to the South; Ciudad Rodrigo to the West.In the center of the square stands the statue of Philip III on a horse, which was placed in 1848. The Plaza Mayor has been the scene of multitudinous events. It has hosted executions in history. Today, it is the location of the annual Christmas market. It has also hosted bullfights and soccer games. Every Sunday and holidays it hosts stamp collecting and coin collecting market in the mornings.

In 1921 the farmhouse was reformed, and then again in 1935 by Fernando García de Mercadal. In 1960s, the plaza closed itself to road traffic and added underground parking below the plaza. The last of the performances in the Plaza Mayor, held in 1992, consisted of mural decoration, the work of Carlos Franco, of the Casa de la Panadería, which represents mythological figures such as the goddess Cibeles. Today, the Plaza Mayor is a major tourist spot, but is also celebrated by the citizens of Madrid and has become a piece of Spanish culture. Next to the Plaza Mayor at Arco de Cuchilleros Street is the Restaurante Botin, the oldest restaurant in the world.

We use cookies to ensure that we give you the best experience on our website. If you continue to use this site we will assume that you are happy with it.OkPrivacy policy